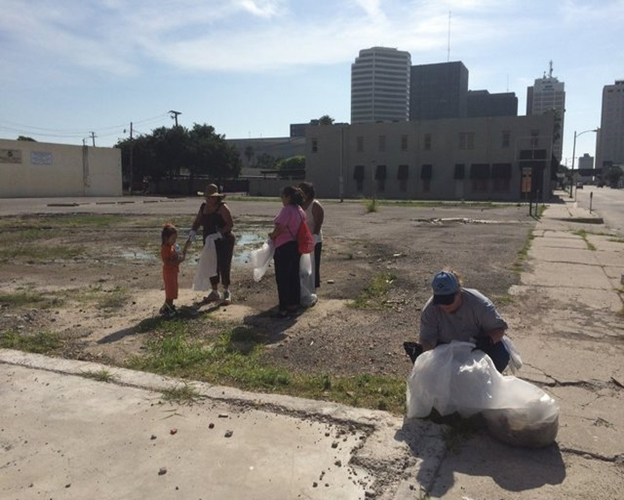 Corpus Christi - Veronica Ramirez, 34, had her walking shoes on when she grabbed work gloves and a trash bag Saturday. She was ready to help make a change in one of the oldest neighborhoods in the city.

After 20 minutes of walking down Leopard Street, her trash bag was full of paper cups, cigarette butts, empty water bottles, paper and plastic ware she found on the street and sidewalks.

Ramirez was one of 60 volunteers who signed up for the fourth annual Thousand Hands Neighborhood Revitalization event and helped collect about three tons of trash.

The event was the latest effort by the Uptown Neighborhood Initiative to clean up and revitalize the area including Tancahua Street and Port Avenue, and the corridors of Antelope, Leopard and Lipan streets.

"It would be great for this part of town to go back to the way it was at one point," Ramirez said. "We need to give back to the community as much as we can," she said.

RTA volunteer Daphney Rodriguez handed out water to those cleaning up Saturday. She said it would take the entire community to come together and help to have a successful Uptown neighborhood.

"We go to other cities like, Austin and San Antonio, and we know there's so much potential down here to have a downtown like those cities," Rodriguez said. "The local gems, the restaurants and shops downtown are the ones we need in this area, that can give us what big chains can't and those local gems will get everything going down here," she said.

Uptown Neighborhood Initiative chairwoman Darlene Gregory said this year she saw a lot more trash in the area but the organization will continue to work until the neighborhood is walkable and vital. Gregory said a plan is underway to employ better lighting in the area as well.

"That lighting campaign will kickoff in the next couple of months, so we will relight Leopard, Peoples Street and the north end of North Beach in the first round," Gregory said. "If you light up the streets, people don't have a place to hide and commit crimes, " she said.

Illuminating the darkened alcoves of Corpus Christi's downtown, uptown, North Beach and entertainment districts could be key in alleviating public safety concerns and drawing in more visitors and more investment.

If approved by the City Council, the plan - which has a working title of Light Up Corpus Christi - would get its jump-start with $30,000. The funds would come from parking meter revenue for a pilot street-lighting project that could improve lighting through retrofitting and also provide additional lighting in darker areas. The improvements would help enhance visibility, deter crime, make visitors feel more comfortable and promote development, advocates say..READ MORE