The former Cantu Funeral Home, 1414 Leopard Street, will be demolished Monday, July 15, at no expense to the elderly owners of the shuttered building or taxpayers.

“Mrs. Cantu contacted me for assistance to demolish her building, which has been a constant issue for the neighborhood and the Corpus Christi Police Department,” said Darlene Gregory, Chairman of the Uptown Neighborhood Initiative. “The homeless population gained access to the structure, squatted there for years, destroying the interior, and making the building uninhabitable”.

In an effort to assist the Cantus, Gregory reached out to the CC Corpus Christi Regional Transportation Authority (CCRTA) and its demolition contractor, Camacho Demolition. Isaac Camacho, Owner, agreed to donate the company’s services to demolish the building. Haas Resources, Inc. donated the fill dirt for the basement. UNI also reached out to Mike Gaines at Envirotest to perform the Asbestos Survey, which was also donated. The City of Corpus Christi waived landfill fees, demolition permit fees, and the disconnection of gas and water service. UNI also contacted AEP, who removed electric service at no charge. These donations are valued at $25,000.

UNI President Gregory added, “ this is a fine example of how public entities can effect community change by virtue of their business relationships, without cost to taxpayers.

Without the assistance of all, owner Gloria Cantu said she wouldn’t have been able to afford to tear the building down, despite a May court order requiring the Cantus to demolish the structure.

The City orders the demolition of hundreds of dilapidated buildings each year, but typically only has enough money in the city budget to pay to tear down a handful of them. Often, buildings stay slated for demolition for years without funds to pay for demolition.

“A seemingly insurmountable problem was solved by the willingness of our friends at Camacho Demolition, Envirotest, Haas Resources, AEP and the City of Corpus Christi to work together for the benefit of those less fortunate and the neighborhood,” Gregory said. “Private/public partnerships like this could resolve many of Corpus Christi’s community revitalization issues. If we all used our time, talents and service for the good of our neighbors, imagine what Corpus Christi could be.” A press conference will be held at 1414 Leopard at 10am Monday, July 15. 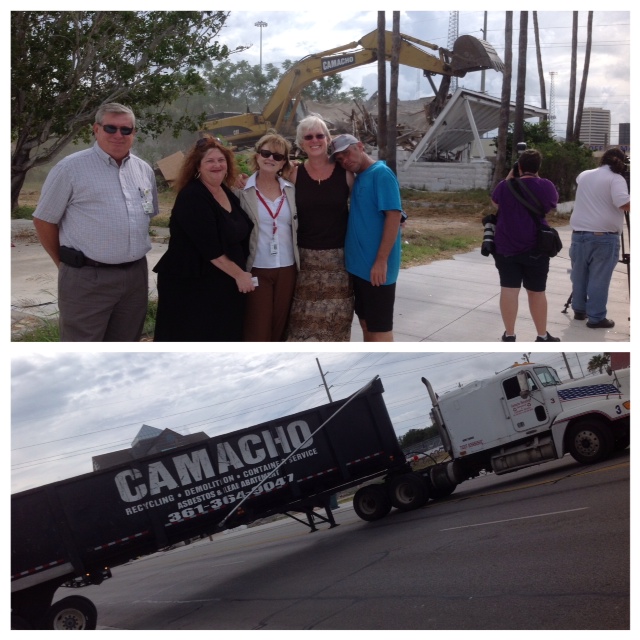